With its fox-like appearance and engaging personality, the Shiba Inu stands out among ancient dog breeds.

Today, the Shiba is a well-recognized dog breed, known as the smallest of the Japanese dogs of the Spitz group. In fact, the Shiba has been declared a national treasure in Japan, the Land of the Rising Sun.

The Origins of the Shiba Inu

The Shiba Inu, which once was used to flush out birds and small game in the brush of Japan’s mountains, was also used to hunt wild boar. One of Japan’s six native breeds, the Shiba belongs to a group which includes the large Akita and the medium Shikoku, Kai, Hokkaido, and Kishu. The dog is known for its upright ears and cat-like flexibility, and is considered an excellent companion dog to single people and families in Japan and the U.S.

A U.S. military family brought the first Shiba Inu into the U.S in 1954. However, the first litter of Shiba pups was not born until 1979. In 1993, the American Kennel Club (AKC) recognized the Shiba as a miscellaneous dog breed, changing the dog’s status. in 1997, to the non-sporting group.

From a Shiba Inu puppy to a Full-Grown Shiba Inu

A Shiba Inu puppy may actually look very different from how it will look when it is full grown. The main differences are changes in the coat coloring or pattern of the Shiba Inu puppy, as well as the appearance of its face and ears. Some puppies have ears that flop down or are down-turned when they are young, but the ears generally change to “stand up” to take on the distinctive Shiba Inu look. The coat color may darken or lighten as time goes on, especially if the Shiba Inu puppy is a Red Sesame, as the Red Sesame coat color doesn’t mean a singular look, but represents a Shiba Inu that has mixture of black and red coloring.
Like the Shiba Inu puppy pictured above, generally Shiba Inu puppies start off with darker coloring and lighten significantly as they grow up, much to the surprise of their owners! A good way to tell what the final coloring will be like is to take a look at the parents and their coloring.
Of course, a Shiba Inu puppy of any color is the cutest in our opinion, but this is good to keep in mind!
If you’re a bit confused about the talk of colors, no worries — our next section has you covered on everything about Shiba Inu colors.

Shiba Inus display coats in a cream to white color, an orange-red hue, or sesame (black-tipped hairs on a red background). You may find markings on the hind legs and forelegs and on the tip of the dog’s tail.

How do each of these look?

To see how they differ, check out our picture guide on Shiba Inu colors.

The Shiba assumes a teddy bear look, thanks to its thick double coat. While the outer coat is stiffer, the undercoat is thick and soft. He sheds to a moderate degree all through the year, and quite prolifically twice each year.

When he does shed, the process is called blowing coat. Envision a winter snowstorm. However, this snowstorm involves your companion dog’s fur, much of which ends up on your clothes and furniture. To reduce the effect, you will need to brush your Shiba Inu twice weekly when it sheds..

While the Shiba Inu does not have to be groomed a lot (he takes care of his own grooming just like a cat), he will still shed heavily twice a year. That is when he gets rid of his undercoat. During this time, your dog will look like he lost a good deal of weight. However, once the hair grows back, he will re-emerge as that huggable and live “stuffed toy” that you have come to know.

Your dog’s temperament will be based on training, socialization, and its heredity. A Shiba puppy with a nice temperament will display curiosity and a willingness to approach others or be held.

To make sure you choose the right Shiba Inu puppy, select a pup that is middle-of-the-road – not an overly aggressive pup nor the timid dog that hides when it is approached. It is always a good idea to ask about the puppy’s parents to get a better idea of what to expect as your dog gets older.

To make sure your Shiba Inu puppy becomes well-rounded, expose it, during puppy socialization training, to various experiences, sounds, sights, and people. Make sure his social skills are polished at a young age so he can be a joy to own as a companion dog.

The adaptable Shiba can live in a home or an apartment, as it adapts well to being on its own. It is a highly sensitive dog, so keep this in mind when issuing dog commands to your new companion dog. Its double coat regulates its body temperature, so the Shiba can adjust to both cold and warm temperatures. It loves family life, as long as it feels included.

Also, the dog has a tendency to roam, so make sure it is placed in a large fenced yard, if possible. Make sure to keep it on a leash and use a harness when you walk it. It may seem tempting to let your dog walk next to you without a harness or a leash, but it is dangerous to let the dog go freely where it can get into dangerous streets, be attacked by other dogs, or suddenly bolt away from you if it gets distracted.

This dog is quite energetic and playful, so you cannot be a couch potato if you make the Shiba your companion dog and pet. The Japanese describe the dog’s personality in three basic words – spirited, good-natured, and alert.

Because the Shiba is so independent, puppy training or dog obedience training may be difficult at first. You need to work at getting your Shiba socialized early, so it has a better chance at getting along with dogs and people. Because of its independence and strong will, the Shiba does not like to be told what to do. Therefore, you need to show an extreme amount of patience when you are honing your dog obedience training skills.

While the Shiba is highly intelligent, he does have a mind of his own. That is why you have to make him think that any dog commands are his idea. If you are a novice, or have not owned a dog before, you should work with a trainer who understands the unique personality of this willful companion dog.

Shiba Inu Possessiveness: “This is Mine!”

One thing you will notice about the Shiba is its possessiveness. It will guard its territory, toys, or food. By proper socialization, you can neutralize this trait. Just make sure you put up any food or toys when other dogs visit your house, as your Shiba may become quarrelsome.

Even though the Shiba tends to be possessive, he still makes a fine family pet, as he is totally devoted to the people in his household. If you make a Shiba Inu your companion dog, you have not just adopted a new family pet; you are acquiring a new family member and a new way of life.

Communicating with Your Shiba

One thing unique about this dog is its vocalization. While the Shiba does not bark, it does emit whining sounds and uses high-pitched vocalizations to get your attention or to communicate. Therefore, you won’t have to worry about a barking dog although your Shiba will still make itself heard.

While the Shiba must be leashed or placed in a fenced yard for its safety, the dog does not like the idea at all. Therefore, leash training can be difficult, although it is necessary. Dog obedience training that involves other dogs is recommended for puppy training, as it also socializes your Shiba Inu dog.

One thing that is easy for the Shiba Inu puppy to master is puppy potty training. Once he knows where he has to do his business, he will continue to go to the same spot each day. The dog is fastidious about cleanliness, so housebreaking is relatively easy.

Ask you butcher to mince some meat and bone. Also, keep your dog’s weight in check by measuring its food and feeding it twice a day.

Don’t leave food out all the time in his bowl. If he is a fast eater and devours everything. in his sight, use a puzzle bowl (also called slow feeder bowls) to slow down his eating time.

To check his weight, place your hands along the ribcage. You should be able to feel the ribs without seeing them. If you cannot feel the ribs, you need to give him more exercise and reduce his food intake.

Again, you can keep your companion dog healthier by feeding him raw dog food recipes in the form of lean beef, chicken, or turkey, combined with organ meats, such as kidneys, and some fruits and vegetables.

While the Shiba does indeed shed, it does not give off a doggy odour. Brush your dog once a week when it is not shedding its undercoat to remove dead hair and distribute the oils in his coat.

Give your dog a bath only occasionally, as doing so too often will dry out his fur and skin. Baths should be scheduled every two to four months.

Brushing the Teeth and Trimming the Nails

Brush your Shiba’s teeth at least twice a week and trim its nails once a month. If you hear your dog’s nails clicking on your linoleum, they need to be trimmed. Because the toenails contain blood vessels, you don’t want to cut the nails too short, as it can hurt your dog and lead to bleeding.

If you are not sure about how to trim the nails properly, get advice from your vet or go to a professional groomer.

Check your dog’s ears once a week for a bad odor or redness, both which may indicate an infection. To clean the ears, wipe them with a cotton ball that has been dipped in a pH balanced ear cleanser. Never insert anything into the inner canal. Just take care of the outer ear.

A Shiba Inu is a great dog to own. Once you know more about its unique temperament and traits, you can get more involved in your dog’s care and enjoy bonding with your companion dog and pet. 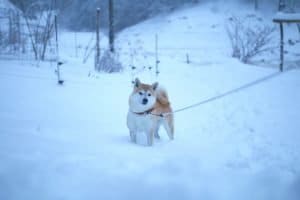 How to Keep Your Shiba from Slipping Past You 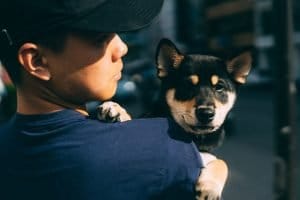 Naming Your Shiba Pup and Communicating with Him

Mari and Her Three Puppies: A Story of a Shiba Inu’s Selflessness 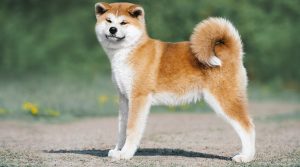 Shiba Inus, Akitas, and The Shibakita 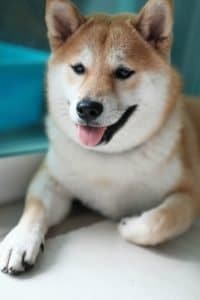 Grooming Your Shiba Inu: What You Need to Know

Ready for a Shiba-Filled Summer?
Apply to join our waiting list!