Cute Holiday Outfits and Toys for your Shiba

If you’re a Shiba owner or looking to get one, then you’re probably familiar with this doge meme which has been circling the internet since 2010 after Atsuko Sato, a kindergarten teacher, posted photos of her pet dog Kabosu, a Shiba Inu, on her blog. The peculiar sideway glance first became popular on Reddit after it was submitted with the title “LMBO LOOK @ THIS FUKKIN DOGE,” which received 266 upvotes, 218 points overall and 48 comments before being archived. It was in 2013 when Kabosu exploded as the internet’s doge meme.

But he is not the only popular Shiba. In 2008, Shiba pups named Autumn, Ayumi, Amaya, Aki, Akoni, and Ando became internet stars after their anonymous handlers “Mr. Feet” and “Mrs. Shoes” posted a livestream of these cute dogs to monitor their actions. The video has amassed over a million viewers around the world. And in the following 6 weeks, fans continued to watch them and the total watchtime amounted to over 391 years! The dogs made the Today Show and have introduced the breed to an international audience.

There are also the Instagram-famous “doges” like Japan-based Shiba Inu, Maru Taro, who has now over 2.5 million followers (thanks to its squinty-eyed grin) and New York shiba Bodhi who is always dressed in fine costume with bow ties, blazers, and scarves dubbing him as the “Menswear Dog”.

Holidays are times to be jolly and now that we’re fast approaching Christmas, it’s time to take out those Christmas outfits and Ho Ho Ho away!

First on the list is definitely the scarf. While it may look a bit bland, it’s actually a very popular Shiba Inu outfit thanks to Suki, a Shiba Inu who lives with San Francisco-based photographer Jonathan Fleming, and is dubbed as the “scarfed Shiba Inu meme”.

We can never go wrong with a Santa Hat which suits Shibas perfectly! Basically because they’re just too cute, anything they wear is also cute. Look at how adorable it is!

Another favorite Christmas character aside from Santa Claus who gives all the good kids gifts (or maybe not for Shibas because they can be pretty mischievous and playful at times — to a fault) is Santa’s reindeer. A simple reindeer headband can definitely switch up the mood. Look how perfectly camouflaged it is… Is it a Shiba Inu or Santa’s reindeer? I guess we’ll never know.

Or try out this really cute Christmas cape that can be easily worn. This definitely racks up cuteness points for them!

Or simply dress them with any green and/or red colored costume theme and they would fit right in to the holiday season. Just like this one.

There are many other cute holiday outfits that you can try with your Shiba Inu just like during Halloween where outfit ideas are endless especially when you’re a very creative dog owner. Here are some photo inspirations that you might want to try for your next trick-or-treating session. (Make sure to bring them because we’re sure that with their irresistible cuteness, no one can say no to them!)

Playtime: Toys you should buy for your shiba

Not all toys are made equal and what works for other breeds like a Lhasa Apso, a Jack Russell Terrier, or a Great Dane might not be the same ones that you energetic and highly interactive Shiba Inu need. It is very important that you are aware of what kind of toy you should buy for your dog because it’s one important aspect of their growth especially for pups.

Toys function first, as a stimulating and engaging material that keeps your pup’s mind healthy. That is, Shibas are characteristically smart and toys like these help keep their minds active.

Second, Shiba Inus are very energetic like a 3 year old kid that won’t be satisfied with just minutes of play. That amount of energy needs to be translated into healthy playtime using interactive toys so that these energy would not pent up and translate into negative behaviors like aggression, separation anxiety, and general mischief.

These interactive toys are best if they’re squeaky (dogs generally love noisy items rather than quiet ones), soft, and can be easily manipulated with their mouth. That being said, it’s also equally important to purchase toys that are durable and safe.

What toys would we recommend?

For smart Shiba Inus, a Dog Casino interactive game would suit them very well. The mechanism of the toy is that to get the treats out, the dog has to pull out the bone “keys” and unlock the treat drawers. This might look easy but this game is not for all dogs. Additionally, these games also come in different levels. Make sure that you know which level you dog is at to give him/her the right level since a challenging puzzle piece for a beginner Shiba (or impatient at that as well) may not end well.

This is just one type of Thinker Toy and there are many other different kinds that you can choose from in the market.

Fetch toys are good interactive toys that can definitely spend the overwhelming energy of a Shiba Inu. One thing that owners should note when playing fetch with Shiba Inus is that they should do it in a safe space. Shiba Inus can be easily distracted by other things and may end up running off and chasing something else instead of the toy.

Lastly, there are spiky ball core toys that are a combination of both thinker and interactive toys. This particular toy has a plushie outside which Shiba Inus can rip apart and entertain them for a few hours. The plush toy is fitted with another ball inside – a spiky core ball – that can get the fun more going. This toy does not only keep your Shiba Inu for a few hours but it also efficiently stimulates and engages its mind and exercises its body! Perfect! 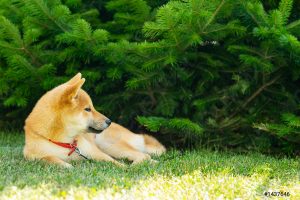 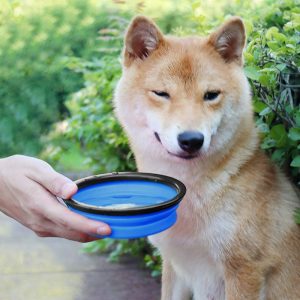 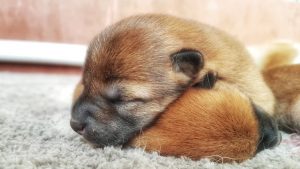